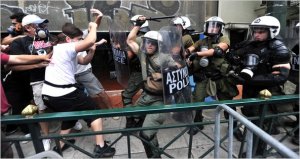 July 1, 2014 – Apocalypse Investing – Preparing for End Times:  Investment professionals have a new
pitch: The sky could soon be falling. Fears of the continuing European debt crisis; floods, wildfires, earthquakes, heatwave, drought, volcanoes and other disasters; political uprisings, the “Arab Spring,” a slowdown in the United States and/or China setting off a global economic crisis; are prompting investors to seek funds that promise to protect their portfolios  in the event of economic Armageddon.

So-called “black swan” funds offer a way to profit in the event of a market collapse, however they are not cheap. Additionally, they may be ineffective because they are designed to protect against the last catastrophe, not the crisis to come.

For decades, diversification – spreading holdings across stocks, bonds and other investments – was promoted as the way to protect investments from market crashes.  But the financial crisis proved that seemingly unrelated assets could fall in unison. During that period, the S&P 500 Index plunged from a high of 1556 in October 2007, to a low of 620 in March 2009 – a whopping 60% drop. As a result, an increasing number of investors now want protection for financial end times.

Although the names “Tail Risk” and “Black Swan” funds are often used interchangeable, they are distinct.  Tail risk events (e.g. the collapse of China’s economy) are situations that, while conceivable are highly unlikely based on mathematical modeling.  By contract, a black swan is an event that
models fail to predict (e.g. an earth shattering 10.0 magnitude earthquake
along the entire length of the San Andreas Fault line in California).

Currently there are many investment vehicles on the market, including ETF’s (Exchange Traded Funds) and Hedge Funds, which are supposed to protect against economic Armageddon.  Tens of billions of dollars are in such investments, representing s small but growing fraction of the investment world.

So how do such Armageddon funds work?  Take a situation like the collapse of China’s economy.  While most American investors do not own Chinese stocks, real estate or currency, the fear is that a shock to China would spread to the rest of the world.  As the stock markets fell, a tail risk or black swan fund would profit because it owned the options to sell shares in the S&P 500 stock Index at far higher levels.  The more the index dropped, the more valuable those options would become. If the S&P 500 doesn’t move significantly, up or down, the option is worthless.  However, if there is a sudden rise or fall in the Index, investors make substantial profits.

Others believe that the best way to reduce risk is to take things out of one’s
portfolio, not add to them.