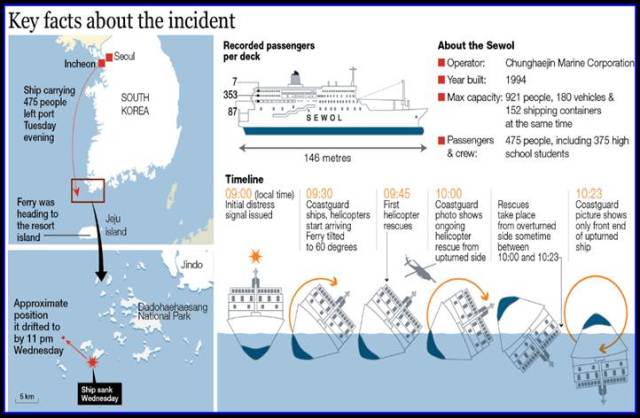 April 25, 2014 – On Whiteboards, in Black Ink, Grim Descriptions of Those Lost as Ferry Sank: No. 150, a boy, had a snaggletooth. No. 111, a girl, was wearing pink slippers and an elastic hairband on her right wrist. No. 87 had on pajama pants with teddy bears.

No. 93 was clutching a Roman Catholic rosary in her left hand.

The descriptions, some rendered in forensic detail, are the only proof that many parents of the teenagers who died on South Korea’s doomed ferry have of their children’s fate. As bodies are recovered from the sunken ship, they are carried to shore and the process of identifying them begins — starting with the descriptions written on whiteboards in a tent set up for the grieving relatives of the students and other victims.

Eom Ji-young was one of the many mothers waiting for word of their children. 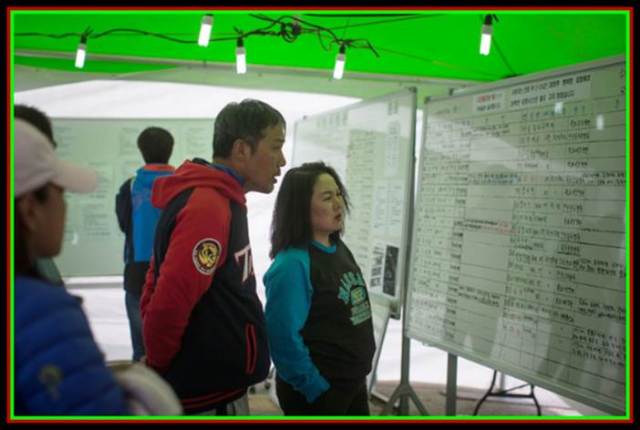 Pictured above, relatives of passengers on the sunken ferry, many of them parents of high school students, gathered in a tent to read descriptions of bodies as they were recovered from the wreck by divers. Click on the link below for the complete story.

As of early Thursday, the death toll had reached 159. Officials said 143 people were still missing and presumed dead. Most of the passengers were students on a school trip.

More than a week after the ferry’s sinking, the exact cause of the accident remained unclear, but the ship began to list after making a sharp turn.

In recent days, the process of identifying the dead has unfolded with grim regularity. Bodies arrive aboard boats, new descriptions are added in black marker to the whiteboards, and the death toll grows. Each entry has a stark simplicity. (Credits – Kirk Semple, Su-Hyun Lee and the NYT).