The Surface of the Asteroid Vesta in Color. 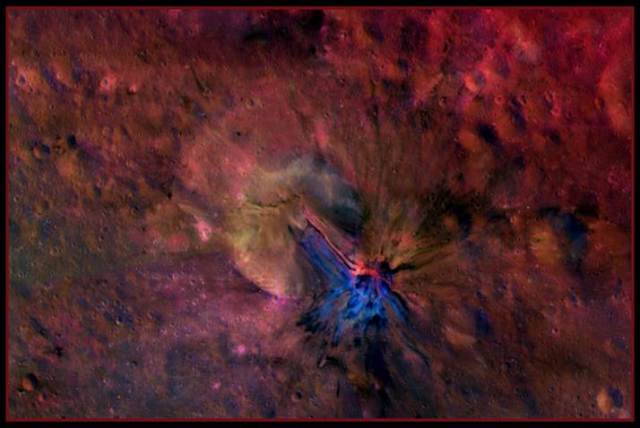 December 18, 2013 – The Surface of the Asteroid Vesta in Color: This colorful composite image from NASA’s Dawn mission shows the flow of material inside and outside a crater called Aelia on the giant asteroid Vesta. The area is around 14 degrees south latitude. The images that went into this composite were obtained by Dawn’s framing camera from September to October 2011.

To the naked eye, these structures would not be seen. But here, they stand out in blue and red.

The crater has a diameter of 2.7 miles (4.3 kilometers). The exact origin of the flow structures is unknown. A possible explanation is that the impact that produced the crater could have created liquid material with different minerals than the surroundings.

The composite image was created by assigning ratios of color information collected from several color filters in visible light and near-infrared light to maximize subtle differences in lithology (the physical characteristics of rock units, such as color, texture and composition). The color scheme pays special attention to the iron-rich mineral pyroxene.

Vesta, minor-planet designation 4 Vesta, is one of the largest asteroids in the Solar System, with a mean diameter of 525 kilometers (326 mi). It was discovered by Heinrich Wilhelm Olbers on 29 March 1807. It is named after Vesta, the virgin goddess of home and hearth from Roman mythology.

Vesta is the second-most-massive asteroid after the dwarf planet Ceres, and comprises an estimated 9% of the mass of the asteroid belt. The less-massive Pallas is slightly larger, making Vesta third in volume. Vesta is the last remaining rocky protoplanet (with a differentiated interior) of the kind that formed the terrestrial planets. It lost some 1% of its mass less than a billion years ago in a collision that left an enormous crater occupying much of its southern hemisphere. Debris from this event has fallen to Earth as meteorites, a rich source of information about Vesta.

Vesta is the brightest asteroid visible from Earth. Its maximum distance from the Sun is slightly farther than the minimum distance of Ceres from the Sun, though its orbit lies entirely within that of Ceres. (Credits – NASA and Wikipedia).