Natural Energy in the Philippines Crippled by Nature. 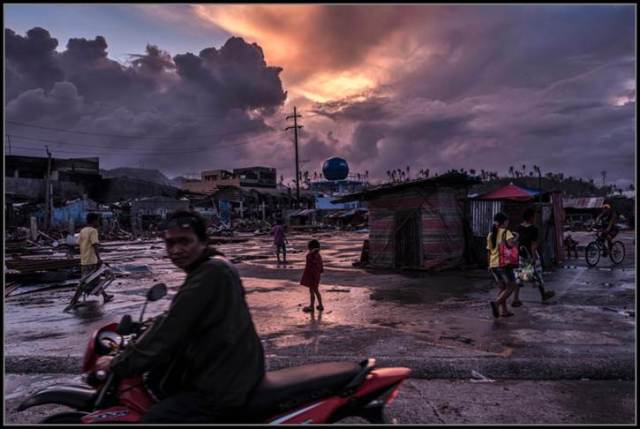 November 22, 2013 – Font of Natural Energy in the Philippines, Crippled by Nature: Clouds of steam surge from fissures in the earth along the beds of mountain streams here that splash down slopes carpeted with coconut palm forests, hints of the enormous source of renewable energy that lies underground. Pictured above, people walked through the coastal city of Tacloban, where the storm surge from Typhoon Haiyan killed thousands.

When Typhoon Haiyan hit the Philippines, people in Basey, Samar Island, went to the Arc of Archangel Saint Michael Church for refuge.

Engineers have drilled a series of boreholes a mile down into hot volcanic rocks, tapping into superheated water under enormous pressure. The water surges to the surface, expands into steam and then cools, spinning a series of turbines that produce five times as much electricity as all of Leyte Island, with 1.5 million people, can consume. The rest of the electricity is sold to other islands in the Philippines.

Or at least that is the way it is supposed to work. When Typhoon Haiyan barreled across Leyte Island almost two weeks ago with a tsunami-like storm surge and nearly tornado-strength winds, killing thousands of people and effortlessly tearing the roofs off homes, it also damaged the crucial geothermal operations here.

For many in the Philippines, the damage here exemplifies a broader paradox: A storm consistent with some scientists’ warnings about climate change has done tremendous damage to an island that is one of the world’s biggest success stories of renewable energy, and to a country that has contributed almost nothing to the global accumulation of greenhouse gases.

“Many Filipino families have become climate refugees,” said Senator Loren Legarda, the chairwoman of the Philippine Senate’s standing committee on climate change. “We may not pollute the world, yet we are victims of extreme weather and climate change.”

As if to highlight that rueful conclusion, the United Nations climate talks in Warsaw, which unfolded as the world became aware of the typhoon’s savagery, have been marred by bitter quarrels between rich and developing nations.

The Tongonan geothermal field on the outskirts of Ormoc on western Leyte Island is the world’s second-largest producer of geothermal energy, after one in California. Yet the operation here is remarkably little known even among renewable energy experts because of its unusual history and a lingering penchant for secrecy for national security reasons.

The New People’s Army, one of the world’s longest-lasting Maoist insurgencies and an enduring though low-intensity threat on Leyte Island, represents a potential risk to the operations. A small army of soldiers and security guards defends the site and maintains layers of checkpoints to keep visitors out of the mountain valley where five geothermal power plants are.

The extraordinary force of the typhoon’s winds shattered the coconut palm forests that line the steep, narrow valley that for years has churned out so much geothermal energy. Particularly near the ridgelines, mile after mile of trees have changed from green to brown since the winds tore loose virtually every frond. The winds then twisted and bent the usually resilient trunks until they snapped or burst.

Sheltered in the valley below, however, the homes of the site’s 795 workers seem to have fared surprisingly well, although one of the military barracks has lost much of its green, corrugated steel roof. Agnes de Jesus, the senior vice president for the environment at the Energy Development Corporation, which now owns the power plants, said that no one was killed or seriously injured at the plants during the typhoon, even as the storm surge on the opposite side of the island, 50 miles to the east, killed thousands in the coastal cities of Tacloban, Palo and Tanauan.

Responding to the Arab oil embargo of 1973, President Ferdinand E. Marcos began developing the field in the late 1970s with a small demonstration project. The goal from the start was not environmental, but nationalistic and economic: to reduce the Philippines’ dependence on imported energy and save money on fuel bills.

After the demonstration project proved successful, five large geothermal plants were built atop boreholes in the same valley here in the mid-1990s, each big enough even today to power the entire island. Each of the five was built by a different company, and then all five transferred them to a state-owned company.

The state-owned company subsequently privatized them and they became the Energy Development Corporation, a company listed seven years ago on the Philippine Stock Exchange.

The valley here differs from many geothermal sites around the world in that the underground rocks are hotter and what comes up through the boreholes is super pressurized water, not steam. 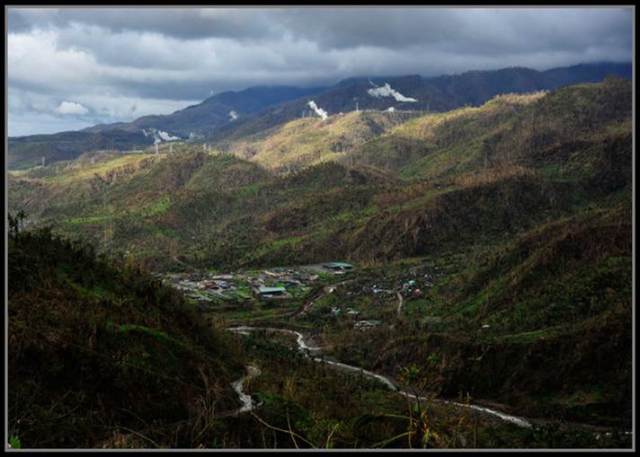 A valley on Leyte Island with five damaged geothermal plants.

The underground water here is at a scalding 480 to 660 degrees Fahrenheit. Four of the power plants essentially rely on two steps: first they spin turbines using the tendency of water at such high temperatures to expand into steam, and then they spin further turbines as the steam cools. Finally, those four power plants were designed to condense the steam into water in steel-reinforced wooden cooling towers for reinjection into the ground.

Engineers for the project here forecast that the underground rocks, heated by volcanic activity a million years ago, will not cool significantly for another million years, while the underground water is being constantly recharged by water percolating down from the surface.

Although geothermal power has been a success here, few other countries, notably tiny Iceland, have similar resources to tap. Geologists in China, currently the largest emitter of global warming gases by a wide margin, have not found comparably hot underground water for electricity generation there, although warm underground water is piped from near Xi’an to heat thousands of homes there in winter.

The entire electrical system, including the geothermal planets, will eventually be rebuilt. However, the most powerful storm every recorded set the project back substantially. Local residents now face winter with no electricity in congruence with the rest of the people of this beautiful country. (Credits – the New York Times).