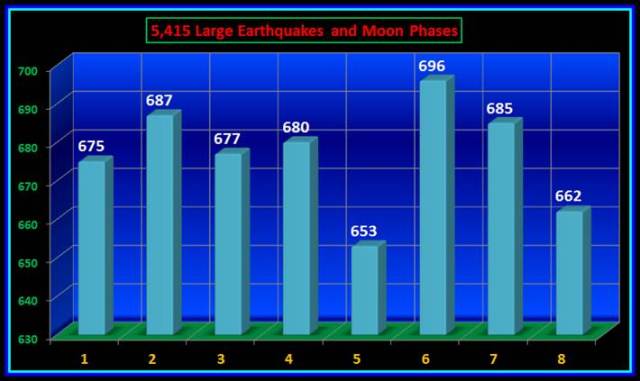 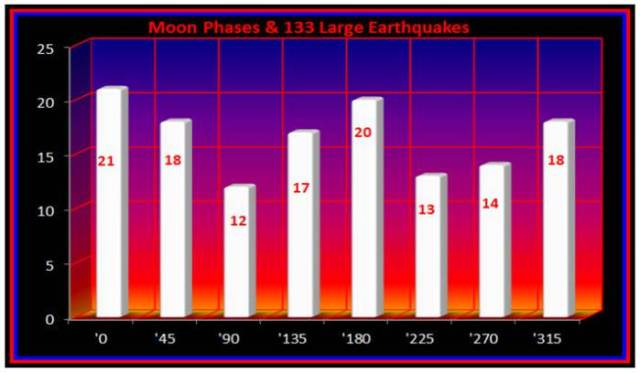 Several analysts have come to the conclusion that most large earthquakes occur during the New or Full Moon Phase. This is because the Moon generates the tides in the oceans; however, it also produces “Earth Tides” or slight bulges in the Earth’s crust, which might trigger quakes in fault lines that are ready to give way. To check this hypothesis I prepared the astrological horoscopes of 133 large earthquakes and separated them into Moon Phases. The bottom chart displays the results for the 133 sample, while the top shows the 5,415 sample results. Clearly the expanded sample size disproves the hypothesis that most large quakes occur near the New and Full Moon phases. As you can see from the top graph, phases 6, 2 and 7 have the most quakes. The Full Moon phase 5 saw the least number of quakes, while the New Moon was 5th in strength.

With the expanded sample size, the peak earthquake period falls into the 6th (225* – Disseminating) phase. The 45* (* = degree) family of aspects is stronger; however, none of the eight categories is statistically significant. Here is the distribution in percent:

The data line is almost flat. The variation between data points is virtually gone. Therefore, Moon phases do not seem to matter that much in forecasting large earthquakes. The average percent distribution is 12.5% (5,415/8 = 676.875/5,415 = 0.125 X 100 = 12.5%). The 1st and 3rd phases are exactly the average of 12.5%. The furthest phases from average are the 5th and 6th at four tenths of a percent below and above the 12.5% average. This may have some minor forecasting uses. For example, over the next 28 ½ day Lunar cycle (Nov. 3rd to Dec. 2nd) the Full Moon Phase should see less earthquakes than usual; while the Disseminating Phase should see more. Therefore, look for the period between Nov. 17th and the 20th to be a low quake period; while Nov. 20th to the 23rd should be higher. (Credits – Excel, Word, USGS with narrative by W. G. Foster).