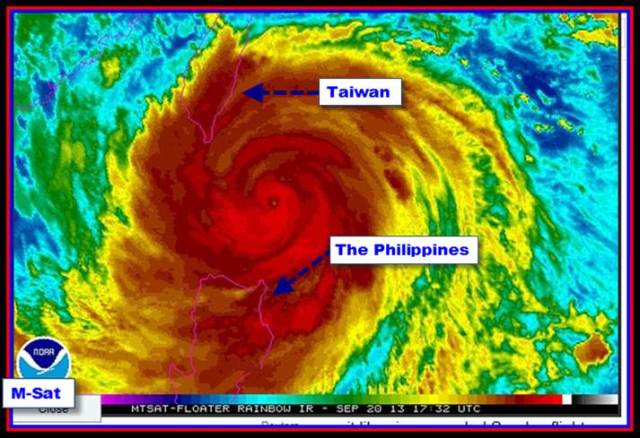 Super Typhoon Usagi continued to make its way toward Hong Kong and China’s southern Guangdong province on Saturday, as it swept toward the South China Sea with strong winds and heavy rain battering parts of Taiwan and the Philippines.

The travel disruptions come during a particularly busy time in the region, with China, Hong Kong and Taiwan all on long weekends for the Mid-Autumn Festival, while South Korea marks the Chuseok holiday. China officially returns to work on Sunday, so many mainland visitors to Hong Kong will be returning home Saturday—ahead of most of the flight and ferry cancellations.

At 7 p.m. local time Saturday, the Hong Kong Observatory said Usagi, one of the strongest storms in the region this year, was about 610 kilometers (379 miles) east-southeast of Hong Kong. Earlier it put maximum sustained winds near the center of the storm at 195 kilometers (121 miles) an hour.

The observatory issued the No. 1 (standby) signal for Hong Kong at 10:40 a.m. local time and expected to upgrade the warning to No. 3 (strong wind) Saturday night. It said Usagi will come “rather close” Sunday and Monday and “pose a severe threat to Hong Kong.”

But for Saturday, the observatory warning in effect was for very hot weather. Under hazy sunshine, the air calm, it was business as usual in Hong Kong. The stores in Tsim Sha Tsui weren’t yet taking storm precautions, and they reported no impact on shopping.

In the Philippines (see below picture), the typhoon made landfall in the country’s northern tip early Saturday, causing flooding and landslides in the mountainous provinces and knocking out power in the area. Winds increased to 215 kilometers an hour with gusts of up to 250 kilometers an hour, according to the government’s weather agency.

Pictured above, the sky over metro Manila Saturday.

It said that Usagi, also known as Odette in the Philippines, had intensified and was “in the vicinity” of the Batanes group of islands in the Luzon Strait, which separates the northern Philippines from southern Taiwan.

The governor of Batanes, Vicente Cato, said in a radio interview Saturday that power was down, making communications more difficult.

Taiwan issued typhoon warnings and heavy-rain advisories Saturday morning for a number of counties in the southern part of the island and along the east coast. Schools and businesses were closed in a dozen counties and cities, according to Taiwan’s Central News Agency. The military has mobilized 23,000 servicemen for disaster relief.

Nearly 2,500 people were evacuated from flood-prone areas and remote mountainous regions as the government deployed military personnel into potential disaster zones, the Associated Press reported. In 13 hours the storm system dumped more than 200 millimeters (8 inches) of rain along Taiwan’s eastern and southern coasts, with officials warning the total could hit 1,000 millimeters, according to AP. Landslides blocked some mountain highways.

China on Saturday upgraded its storm warning to the highest of its four levels, “red,” according to the official Xinhua news agency. Xinhua reported Friday that more than 20,000 fishing boats operating out of Fujian province, which borders Guangdong, had returned to port to seek shelter.

Dragonair had already canceled one flight on Saturday from Taichung, in Taiwan, to Hong Kong. Dragonair and its parent Cathay Pacific warned against nonessential travel on Sunday and Monday. Hong Kong International Airport said it was advising passengers departing the city to check flight information with their airlines or on the airport’s website (hongkongairport.com). (Credits – Reuters and the WSJ).