September 19, 2013 – Twin Storms in Mexico Kill 80 – With 58 Missing: The toll from devastating twin storms climbed to 80 on Wednesday as isolated areas reported deaths and damage to the outside world. Mexican officials said another 58 people were missing in a massive landslide in the mountains north of Acapulco. The storm that devastated the Pacific resort over the weekend regained strength Wednesday and became Hurricane Manuel, taking a route that could see it make landfall on Mexico’s northwestern coast overnight. Pictured above, Acapulco tourists stranded – waving from roof tops.

It would be a third blow to a country still reeling from the one-two punch of Manuel’s first landfall and Hurricane Ingrid on Mexico’s eastern coast. Sinaloa state civil protection authorities said some areas were already flooding in the towns of Escuinapa, El Rosario and Mazatlan. At least 60 families were evacuated from the fishing village of Yameto, in the Sinaloan town of Navolato, authorities said. The affected area is mainly small fishing villages. 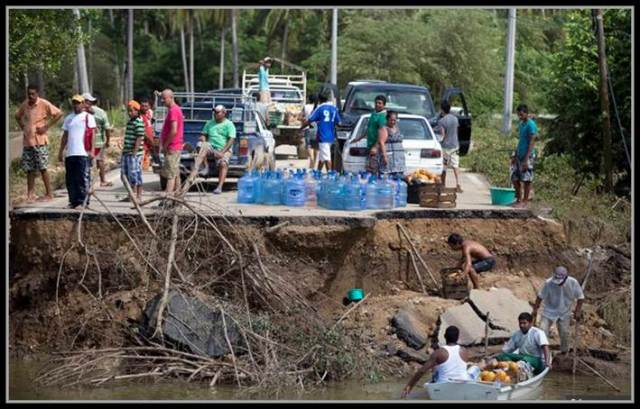 Outside Acapulco, federal authorities reached the mountain village of La Pintada by helicopter and evacuated dozens of people, many of whom were hurt, one seriously, said Interior Minister Miguel Angel Osorio Chong. Mr. Chong said at least 58 people are missing in the coffee-growing village where many homes were buried by a landslide, adding that there is a risk of more landslides. Officials have not yet seen any bodies, he said, despite reports from people in the area that at least 15 people had been killed. “It doesn’t look good, based on the photos we have in our possession,” Osorio Chong said, calling it “a very powerful landslide; very big … You can see that it hit a lot of houses.”

Mayor Ediberto Tabares of the township of Atoyac told Milenio television late Wednesday that 15 bodies had been recovered in the village. Tabares told the same television station earlier in the day that 18 bodies had been found. Atoyac, a largely rural township about 42 miles (70 kilometers) west of Acapulco, is accessible only by a highway broken multiple times by landslides and flooding. Ricardo de la Cruz, a spokesman for the federal Department of Civil Protection, said the death toll had risen to 80 from 60 earlier in the day, although he did not provide details of the reports that drove it up.

In Acapulco, three days of Biblical rain and leaden skies evaporated into broiling late-summer sunshine that roasted thousands of furious tourists trying vainly to escape the city, and hundreds of thousands of residents returning to homes devastated by reeking tides of brown floodwater. The depth of the destruction wreaked by Manuel, which first hit Mexico Sunday as a tropical storm, was highlighted when the transportation secretary said it would be Friday at the earliest before authorities cleared the parallel highways that connect this bayside resort to Mexico City and the rest of the world. 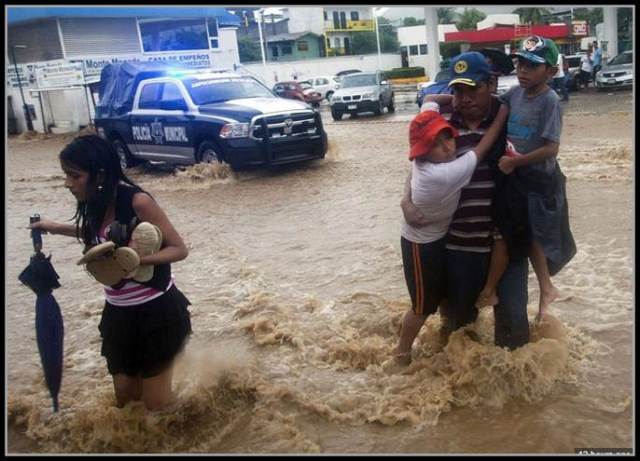 Hundreds of residents of Acapulco’s poor outlying areas slogged through waist-high water to pound on the closed shutters of a looted Costco, desperate for food, drinking water and other basics. Many paused and fished in the murky waters for anything of value piling waterlogged clothing and empty aluminum cans into plastic bags. If we can’t work, we have to come and get something to eat,” said 60-year-old fisherman Anastasio Barrera, as he stood with his wife outside the store. The U.S. National Hurricane Center said Wednesday evening that Manuel’s eye wall was now nearing the Pacific Coast of Mexico. (Credit – RSOE Emergency and Disaster Information Service [EDIS] Budapest, Hungary).