Major Global Earthquakes and Tsuamis over the Last 4,000 Years. 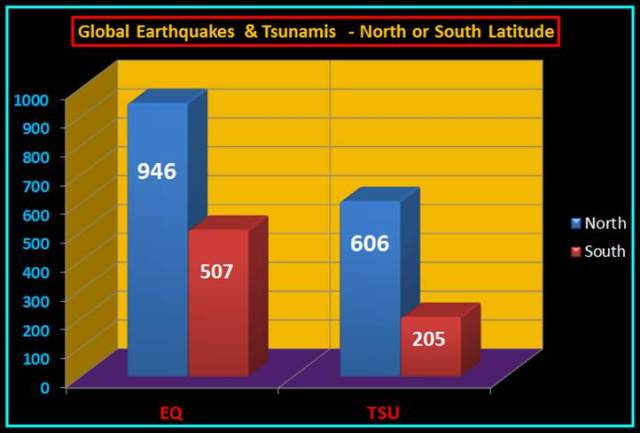 The chart above reflects the distribution of major earthquakes and tsunamis over the last 4,000 years. This data was extracted from a NOAA database.

Clearly, north latitude has seen the majority of quakes and tsunamis during this time period. This is where Japan, the Kuril Islands of Russia, the eastern Aleutian Islands of Alaska and the Philippines are located. These regions are prime hot beds of quake and tsunami activity; since they are located on the northwest and western edge of the Pacific “Ring of Fire” as shown below:

The most spectacular recent example of this was the mega-quake and tsunami that occurred off the coast of Japan on March 11, 2011. Here are some links for videos of this event:

These videos show the inconceivable power of the tsunami as everything is sweep away. The death toll was estimated at 28,000 with billions in damages. One gallon of water weighs 8.3 pounds, while one liter of water weighs 2.2 pounds. Can you imagine the weight of the tsunami wave that hit Japan on March 11, 2011!

Often, the killer generated by large earthquakes is fire and or water. This was very apparent during the Indonesian earthquake on December 26, 2004 (230,000 dead worldwide) and Japan in 2011 (28,000 dead). Witness the 1906 San Francisco earthquake, which produced a fire that wiped out the city.

Where will the next massive tsunami strike? Every region of the “Ring of Fire” has seen a major release over the last 2,000 years except one – the U.S. Pacific Northwest. A major eclipse will strike the U.S. in 2017. Could this be the trigger for a natural disaster of unparalleled proportions? Only time will tell.

5 Responses to Major Global Earthquakes and Tsuamis over the Last 4,000 Years.