Powerful Earthquakes Strike in the South and Northwest Pacific. 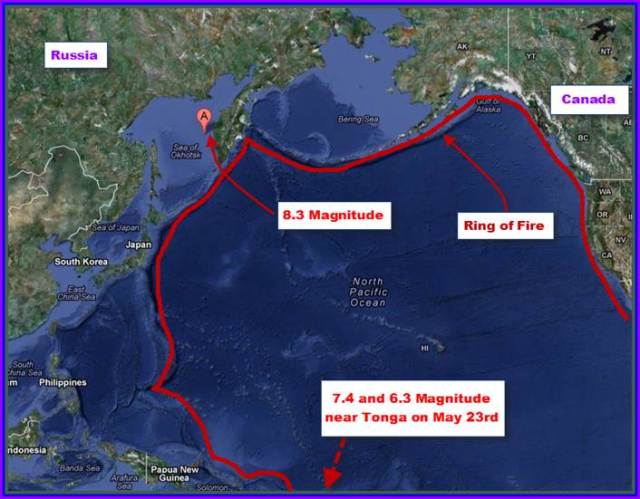 May 24, 2013 – Extremely Powerful Earthquakes Strike the Pacific Ring of Fire: Three earthquakes hit the “Ring of Fire,” picture above outlined in red. Two are slightly off the map and are shown by the red dash arrow. A 7.4 and 6.3 magnitude earthquakes pummeled Tonga on May 23rd. The first was a powerful 7.4 quake near Vaini, Tonga; which occurred at 5:19PM GMT. The second more moderate quake struck at 9:07PM GMT near Nuku’alofa, Tonga.

Update May 24, 2013 at 10:57AM PDT from the New York Times – Quake in Russia’s Far East Prompts Evacuations:  An 8.3-magnitude earthquake struck Russia’s Far East on Friday, sending tremors that prompted evacuations as far away as Moscow, more than 4,000 miles to the west of the epicenter. The United States Geological Survey recorded the earthquake at 5:44 p.m. local time at a depth of approximately 373 miles below the Sea of Okhotsk, off the coast of the Kamchatka Peninsula. Russian news media reported that reverberations from the earthquake rattled furniture and sent books toppling off of bookshelves in Petropavlovsk-Kamchatsky on the Kamchatka Peninsula, and officials initially told residents on Sakhalin and the Kuril Islands to reach higher ground in case of a tsunami. Russia’s Emergency Ministry later lifted the tsunami warning, and said in a statement that no injuries had been reported. Tremors were felt in more than a dozen regions spanning Russia; in Moscow, local law enforcement officers evacuated 850 people from two apartment buildings after residents said the buildings were shaking.

Moving to the north, an 8.3 magnitude “monster quake” struck in the Sea of Okhotsk, Russia (see map and above update five minutes ago)

The strange thing about all these earthquakes was that they were all at extreme depth. The two in Tonga were between 154 and 171 kilometers (96 and 196 miles). The one near Russia in the north was at 608 kilometers (378 miles). This is a rare event and has not occurred in years. The fear here is that a major “adjustment” is forthcoming from the famous “Ring of Fire.”

Further, there have been an usual number of new volcanic eruptions near or on the Ring of Fire.

Could these events portend a serious quake and tsunami in along the coast of Oregon, Washington and British Columbia?

I do not know, however, these volcanic and earthquake event taken together, paint an ominous scenario of for the future.

6 Responses to Powerful Earthquakes Strike in the South and Northwest Pacific.