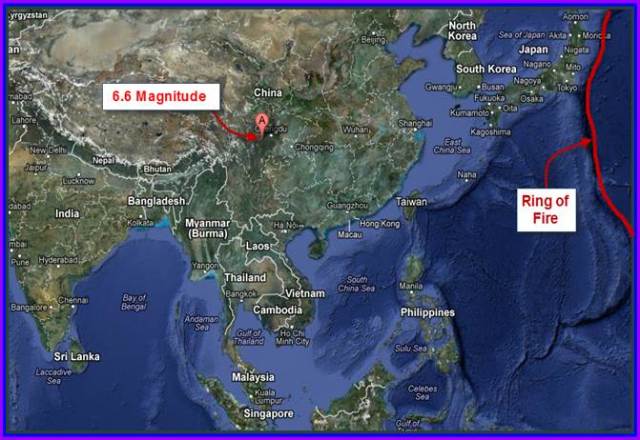 April 20, 2013 – A Deadly 6.6 Magnitude Earthquake Struck China: A powerful earthquake has struck China’s Sichuan province. At least 192 people are dead and 11,200 are injured, but local authorities say the toll could be much higher once the full scope of this disaster is realized.

The quake hit shortly after 8 am local time (0:03 GMT) in Lushan county in the city of Ya’an in the southwest of China. The city is famous for its pandas.

The Chinese government’s seismological bureau measured the quake at magnitude 7. The US Geological Survey recorded it at 6.6 at a depth of less than 13 kilometers. This could magnify the impact.

Multiple aftershocks followed: The largest was marked at 5.1, five minutes after the first quake.

Pictured above, people wait outside in fear of a strong aftershock.

The Xinhua News Agency said that the quake rattled buildings in the provincial capital of Chengdu, 115 kilometers (70 miles) to the east.

The epicenter lies along the same Longmenshan fault where a 7.9 magnitude quake struck in May 2008, killing nearly 70,000 people. (AP, Reuters)