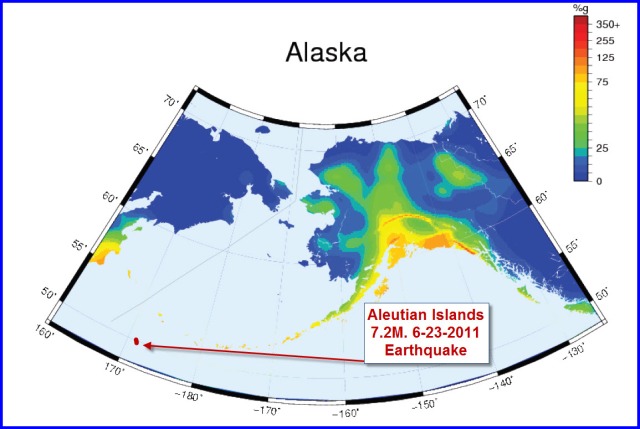 March 30, 2013 – Alaska Earthquake Hazards Map: Alaska, and the Aleutian Islands, are very seismically active; particularly around the Prince William Sound and the Aleutian Island chain. This is because they are a part of the “Ring of Fire,” a portion of which is located along the extreme North of the Pacific Plate. The reason the Ring of Fire is so active is because the Atlantic Ocean is gradually spreading, along the Mid-Atlantic Ridge, pushing the Pacific Plate Under the edges of the Ring of Fire. Approximately 80% of the earth’s great earthquakes happen along this boundary. The Ring of Fire is located around the entire Pacific Ocean and is part of the San Andreas Fault that runs up through the Sea of Cortez, the Salton Sea in Southern California, East of Los Angeles, through San Francisco and then off the West coast of North America. It, also, extends along the entire Western portion of South America. This is why Chile and Peru are continually hammered with great quakes.
The Master of Disaster