The DJIA and Planets in Signs. 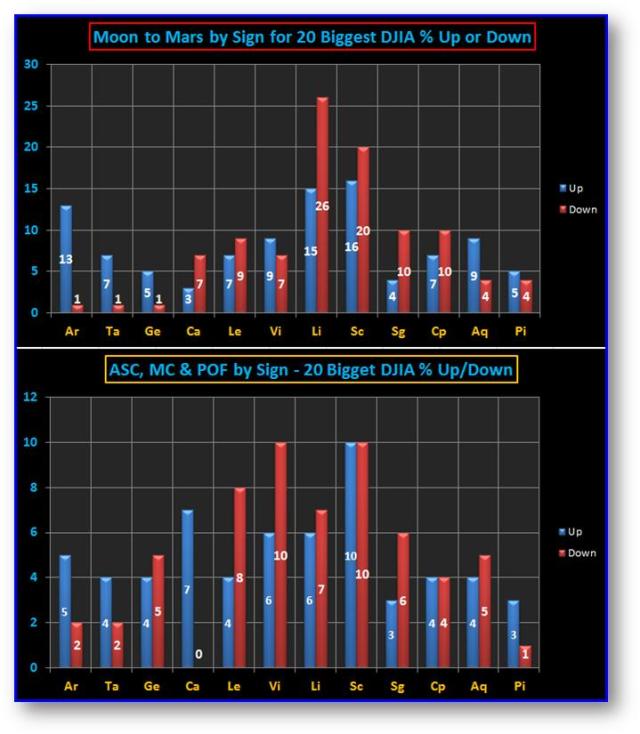 March 11, 2013 – The Dow Jones Industrial Average (DJIA) and Planets in Astrological Signs: The charts above reflects the DJIA and the 20 biggest percent changes, over the last 114 years from 1899 to 2013.

For example, look at the first two bars in the top graph. The blue bar (up DJIA) shows 13 and the red bar (down DJIA) is one. This means that for the sum of the Moon to Mars (Moon, Sun, Mercury, Venus and Mars) the DJIA was up 13 times in the 20 biggest surges in price. Similarly, the DJIA was down (red bar) only once for the sum of Moon to Mars over that 114 year period.

This means that when the Moon is in the astrological sign of Aries, the DOW is much more likely to go up significantly than down. Each sign of the Zodiac is measured in this manner. The Moon Is currently in Pisces on March 11, 2013. As you can see, this is a split decision on what will happen with the DOW; i.e., five up and four down.

The bottom graph reflects the sum of the ASC, MC and Part of Fortune (POF) at the time of the 20 biggest percentage increases in the DOW. This is more a timing thing for the day of the significant rise or fall. For example, AR (Aries) shows a blue bar of five (up DOW) and a red bar of two (down DOW). The three points of ASC, MC and POF occur once every 24 hours due to the rotation of the earth on its axis.

Using this information and the details by planet and sign behind it, I hope to forecast significant changes in the DOW.

More about this in futures posts.