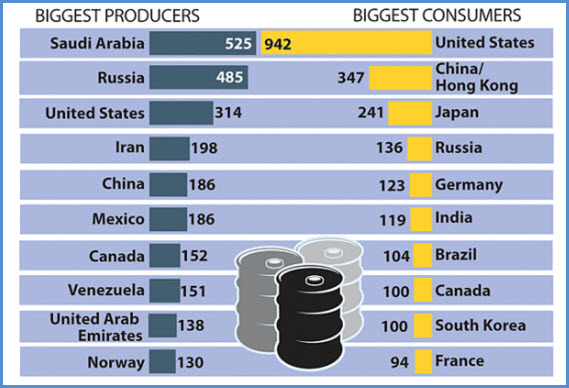 August 20, 2012 – Addicted to Crude Oil: Above, is a chart of Crude Oil producers and users in millions of tons. Note the disproportionate “addiction” of the United States. Future expectations are for a big increase in usage by China, India and Brazil. Any drop in production, or a brief or extended cut-off of supply in the shipping lanes chock points; will skyrocket the price into the stratosphere.

The U.S. major stock indices (DJIA, NASDAQ and S&P 500) are all closing in on record levels.  This is in juxtaposition to 45 million on food stamps, unemployment at elevated levels,  debt at the federal, state and local levels at unprecedented figures; and rampant poverty. The chasm between the 1% of the haves and the 99% of the “having less every day” grows wider by the hour. There is a cataclysmic disconnect between the rich and the rest that is ready to explode.  The years between 2012 and 2015 are ripe for chaos and crisis of unprecedented proportions.
The Master of Disaster