June 15, 2012 – Mount Gamkonora Shoots Ash to 10,000 Feet: Hundreds of residents in northeastern Indonesia fled their homes on Wednesday after a brief eruption at Mount Gamkonora, spewing towering columns of ash and smoke and prompting officials to raise the volcano’s alert level to the second-highest state. 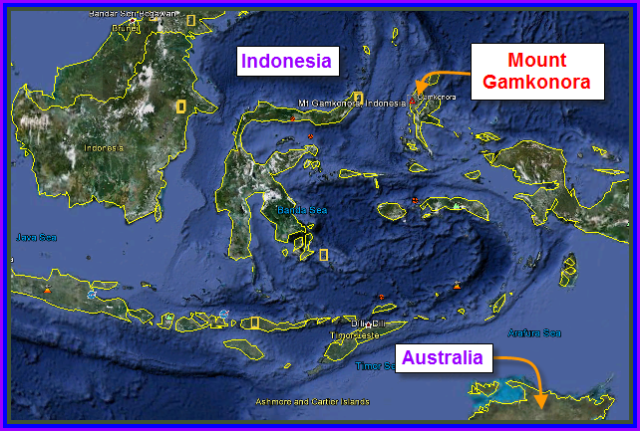 The 1,635-meter (5,364 feet) tall volcano, which is located on the west coast of Halmahera island in the Maluku Islands (see map above) and is part of North Maluku province, began to erupt on Wednesday afternoon and sent thick ash clouds up to 3,000 meters (9,842 feet) high, although no lava flows were seen. Pictured below is Mount Gamkonora during its July 2007 eruption (two photos).

The Antara news agency reported that hundreds of residents living on the volcano’s slope evacuated the area following the eruption, but they returned hours later after officials determined their communities are not currently at risk. New evacuations could be ordered if activity at the volcano continues to increase. Following Wednesday’s eruption, the country’s Volcanology and Geology Disaster Mitigation Center (PVMBG) decided to raise the volcano’s alert status to Siaga (level 3), the second-highest level. The agency uses a warning system with four levels of alert, with level 1 being the lowest and level 4 being the highest.

PVMBG said activity at Mount Gamkonora has been increasing for months, with more frequent volcanic earthquakes and an increase of magma activity near the surface. Authorities are still uncertain whether the current eruption will lead to a major event, but past eruptions at the volcano have nearly all been explosive. Mount Gamkonora last erupted in July 2007, forcing the evacuation of nearly 10,000 people but causing no known casualties. The most notable eruption at the volcano took place in May 1673, when a massive eruption caused significant damage in the area and resulting tsunami waves which flooded nearby villages (pictured below in a painting).

An unknown number of people were killed. Indonesia has more active volcanoes than any other country in the world and sits on the so-called Pacific Ring of Fire, a belt of intense volcanic and seismic activity. (Credits: Photo’s – Getty Images, Narrative – RSOE Disaster Service, Links – Wikipedia et. al.).