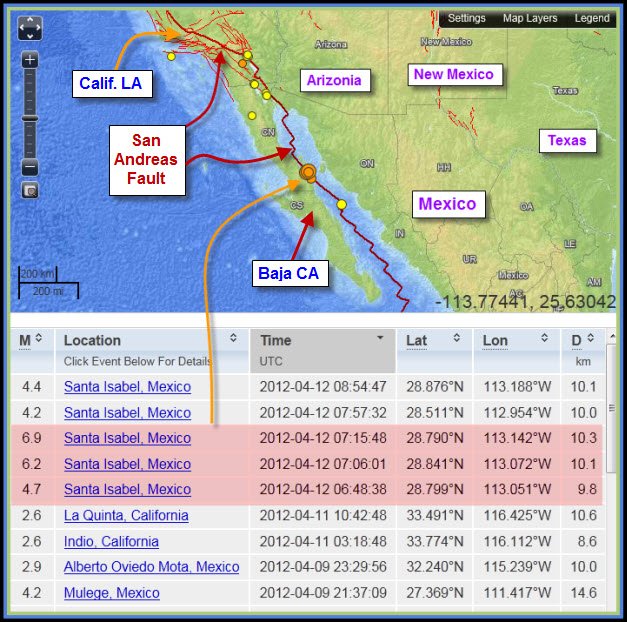 April 12, 2012 – Two Strong Earthquakes Struck the Gulf of California: Only 325 miles south of Phoenix, Arizona. The 6.2 and 6.9 magnitude quakes hit early Thursday; April 12th. The USGS chart above shows the activity along the infamous San Andreas Fault Zone, that splits California like the “dagger of doom.” The 800 mile strike/slip fault starts in Northern California and ends below the Salton Sea; where it turns into a zigzag line of spreading and strike/slip faults – where today’s quakes took place.

The earthquake times on the USGS chart are in UTC (GMT) time. For example, the 4.7 magnitude event (bottom of the pink zone) shows the date and time as “2012-04-12 06:48:38,” which means 2012 – April – 12th – 6:48AM and 38 seconds. Subtract seven hours from these UTC (GMT) times to get local time. Therefore, the 6.2 magnitude tremor struck at 12:06AM local time (7:06 – 7:00 = 00:06AM or 12:06AM) Pacific Daylight Time (PDT). Exactly nine minutes and 47 seconds later, a more powerful 6.9 magnitude quake struck in almost the same spot (see the Latitude and Longitude columns). Both quakes were at a relatively shallow 10 kilometers (6 miles) but probably did not produce tsunamis because of the nature of the strike/slip and spreading fault lines. Powerful tsunamis are generally produced by subduction zone faults, where one fault dives under another. This is the case with both the December 26, 2004 Sumatra, Indonesia and March 11, 2011 mega-quakes and tsunamis. 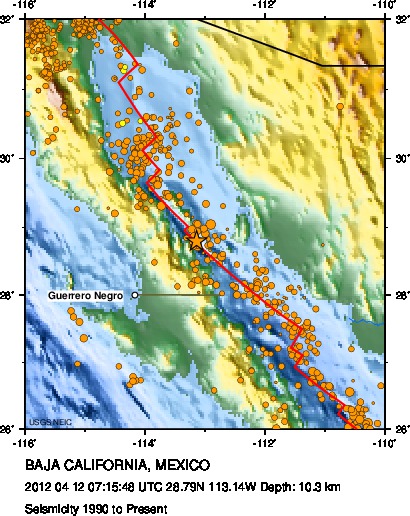 Today’s 6.2 and 6.9 quakes occurred about 85 miles northeast of Guerrero Negro, Baja California, Mexico; 110 miles NNW of Santa Rosalia, Baja CA, Mexico; 130 miles west of Hermosilla, Sonora, Mexico; and 325 miles south of Phoenix, Arizona, USA.
The fear in this situation is that today’s events portend an “awakening” of the San Andreas; leading to a catastrophic release in the San Diego, Los Angeles and/or San Francisco regions.
The Master of Disaster