February 28, 2012 – Water Views With a Hint of Daring and Danger: Pictured above, A mudslide in Stanwood, Wash., north of Everett, claimed a house and halted train service last week, but no one was hurt (Mark Harrison/The Seattle Times).

As commutes go, the 59-minute train trip from this Everett, Washington State; into downtown Seattle can be pretty sweet. The tracks, first laid in 1873, swerve between the scenic eastern edge of Puget Sound and the steep bluffs increasingly covered with houses overlooking the water. 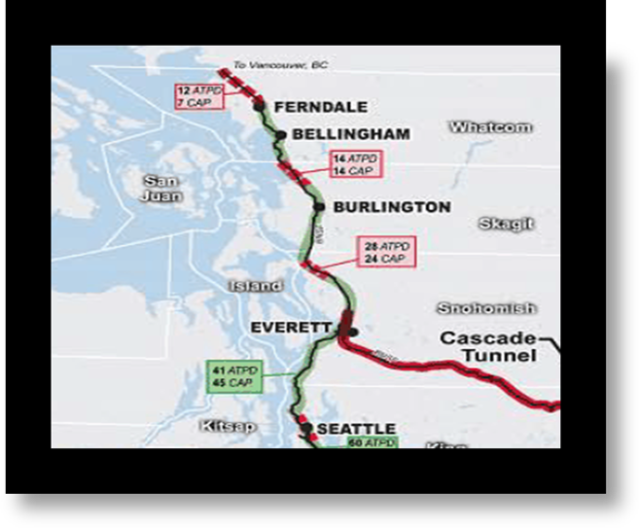 “And this time of year” said Steve Pratt, a regular rider, “the sunsets are great.” When you can see the sun, that is.

As Mr. Pratt knows, this time of year it often rains — a lot. And those pretty bluffs get wet — really wet. Eventually, all that water changes the alluvial soil from relatively stable to completely sodden. It also transforms Mr. Pratt and his fellow passengers. Instead of train riders, they become bus riders.

Sometimes those bluffs become so saturated that they collapse, sending earth, trees and more down onto the tracks. That halts passenger train service and forces Mr. Pratt and his fellow passengers to transfer to express buses, to once again endure (and mostly shrug off) a topographical drama less spectacular but far more common than the potentially deadly earthquakes, avalanches and tsunamis that loom in anxious minds across the Pacific Northwest: mudslides.

“It’s kind of a pain because you never know until you get over here whether it’s going to go or not,” Mr. Pratt said, standing near the train platform at the Everett station just after getting off the No. 510 bus on an evening when a slide had closed the tracks. “But it’s just part of living in Puget Sound.”

Mudslides are a threat from the Appalachians to the Andes, but a few parts of western Washington are particularly vulnerable. According to engineering studies, at one point or another over the past 80 years, pretty much the entire 20-mile stretch of track between Everett and Elliott Bay in Seattle has been covered by a mudslide — or a landslide, as they are technically (but not colloquially) called. And train tracks are just one victim.

On Wednesday, the day a slide closed the tracks, another one took out a house beside the water in Stanwood, north of Everett. The owner was in Mexico at the time and no one was hurt. But the slide demonstrated another peril: sometimes houses most at risk are not on top of cliffs but at the bottom, steps from the water.

The sound is dotted with slivers of beachfront property where tiny private developments have sprung up over time, sometimes consisting of a single street with houses squeezed onto subdivided lots. Often there are only a few dozen feet of buildable land between the water and the massive slopes that descend to it. The land is precious, and sometimes precarious.

“More and more people live in places that would not have been regarded as good places to be before,” said Tim Walsh, the chief hazard geologist for the Washington Department of Natural Resources.

This month, as a second consecutive La Niña winter brings heavy rain, the department is trying out an online mapping tool that, using data from the National Weather Service, tries to gauge the rainfall saturation of certain areas of western Washington. The software does not try to predict which hillsides will collapse — that would be a far more complicated and expensive prospect, involving ground sensors and telemetry — but the state hopes it can at least alert local emergency managers to potential risks.

Mr. Walsh said that mudslides rarely get as much attention as other disaster threats, but that “excluding earthquakes in California, they probably are the largest or maybe second largest cause of natural disaster economic losses.”

He noted that damage from mudslides, including houses and buildings destroyed, rail lines and roadways damaged, is often categorized as flood damage by the Federal Emergency Management Agency, even when there is no traditional flood. That can mask the true costs of mudslides.

A staple of mudslide stories is the near miss — the homeowner who had just dashed off to the grocery store or was asleep in the bedroom when a slide struck the garage, or the train that had passed by just minutes earlier. (In Stanwood, residents said, an elderly man living in a house next to the one destroyed had died just a day or two before the slide.)

But landslides can also be lethal. In a tragedy often recalled locally, a family of four was killed in 1997 when a slide knocked their house on Bainbridge Island into the sound during the night. 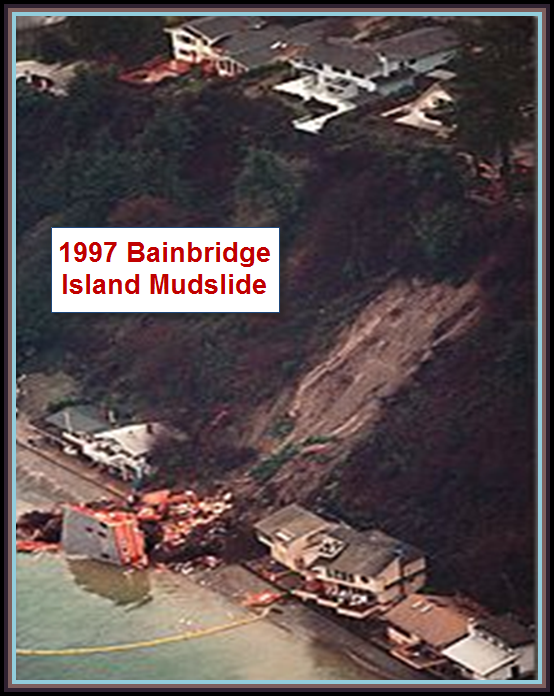 “Every few decades, you have a big event,” Mr. Walsh said. “They’re sufficiently infrequent that you forget.” Except on the train. Last year, the Seattle-Everett route had nearly 100 slides, the most in at least 20 years, according to Gus Melonas, a spokesman for Burlington Northern Santa Fe, which owns the tracks. No one was hurt, and this year the number of slides has been relatively small, at least so far.

Mr. Melonas said that of the 32,000 miles of track the railroad maintains in 28 states and two Canadian provinces, the Seattle-Everett route experiences by far the most slides. Burlington Northern keeps cranes, bulldozers and other equipment staged near the tracks and has sensors along the tracks that are supposed to alert trains to slides. In the summer, ditches are dug and culverts are maintained to steer water away from hillsides, Mr. Melonas said.

The railroad closes tracks to passenger service for at least 48 hours after a slide, but it usually reopens to freight within a few hours. The line is crucial for commerce; the Boeing Company uses it to transport huge parts from the Port of Seattle to its factory in Everett. But given the increasingly crowded region and the growing demand for use of the tracks — Sound Transit started the Everett commuter run in 2004 — slides are a problem that can only be managed, not solved, Mr. Melonas and several others said.

“We all know that this is a rain forest area in which we live,” he said. “This just goes with the territory out here.” (Credits: Pictures – Getty Images, Narrative – William Yardley for the New York Times).