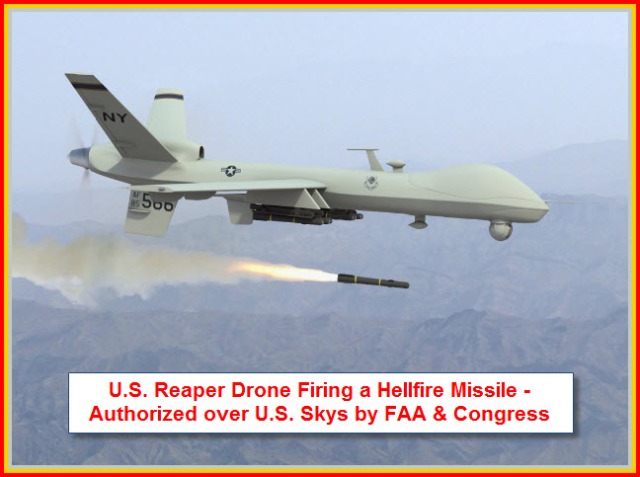 February 4, 2012 – Unmanned drones could soon become a more common presence in U.S. skies: A broad funding bill for the Federal Aviation Administration, which was released this week and is expected to win final approval before the middle of February, for the first time establishes specific deadlines designed to speed up the widespread use of unmanned planes, or drones, across the U.S.

The bill calls for integrating a wide range of so-called unmanned aerial vehicles (UAV’s)—operated by both governmental and corporate entities—with commercial and general aviation traffic across the nation’s skies.

Perhaps best known for their use in combat abroad, unmanned aircraft currently can fly only in restricted areas over the U.S. That has kept their numbers low.

Most are operated by federal agencies for law-enforcement or security purposes. But under the Federal Aviation Administration (FAA) bill, proponents envision huge fleets of drones operated nationwide by states, local governments and companies.

Pictured above is General Atomics Reaper Drone firing a Hellfire Missile. The MQ-9 Reaper is a medium-to-high altitude, long endurance remotely piloted aircraft system. The MQ-9’s primary mission is as a persistent hunter-killer. The MQ-9’s secondary mission is to act as an intelligence, surveillance and reconnaissance asset, employing sensors to provide real-time data.

MQ-9 Predator UAV in Action at the Mexican Border Video.

Drone manufacturers, local governments and business groups have long complained about the FAA’s go-slow approach to allowing unmanned and manned aircraft to share the same airspace. The bill, among other things, requires the FAA to move expeditiously to phase in operation of drones and establish six test areas nationwide.

The unmanned aircraft provisions push the FAA to move faster in implementing changes long sought by industry groups. The FAA has moved cautiously in both areas, partly out of safety concerns and partly due to lack of clear congressional direction.

Now the legislation locks in stable funding and puts the onus on the agency to quickly launch a flurry of initiatives. FAA officials will have to report progress to lawmakers regularly and are obligated to demonstrate significant advances.

Yet major challenges still confront many of the congressionally imposed deadlines.

But barely hours after the 374-page bill became public; pilot-union officials urged a more deliberate approach. Lee Moak, president of the Air Line Pilots Association, which represents 53,000 pilots across North America, said his organization remains worried about safety issues such as training and certification of those flying unmanned aircraft.

Safety experts also have raised questions about the ability of sensors aboard unmanned aircraft to properly detect a nearby plane, and to assure immediate action to avoid a midair collision. (Credit – The Wall Street Journal, modified)

Didn’t pay your taxes? Will the IRS “take you out” with a drone strike? Speaking out against the “wrong people in government?” Drone time for John Q Public. Since drones will be in the hands of Federal, State and local governments; as well as companies, we could have “Drone Wars” between corporations. GE hits Google who attacks Microsoft, while Amazon.com was wiped out by the axis powers of AOL, Barnes & Nobel and Facebook. The allied powers of Exxon Mobile, Wal-Mart and Berkshire Hathaway; go on the counter attack as World Drone War I arises!

2 Responses to Unmanned Drones could soon become a common sight in U.S. skies.