A 6.9 Magnitude Earthquake Struck Near Vanuatu – Less than Two Hours Ago. 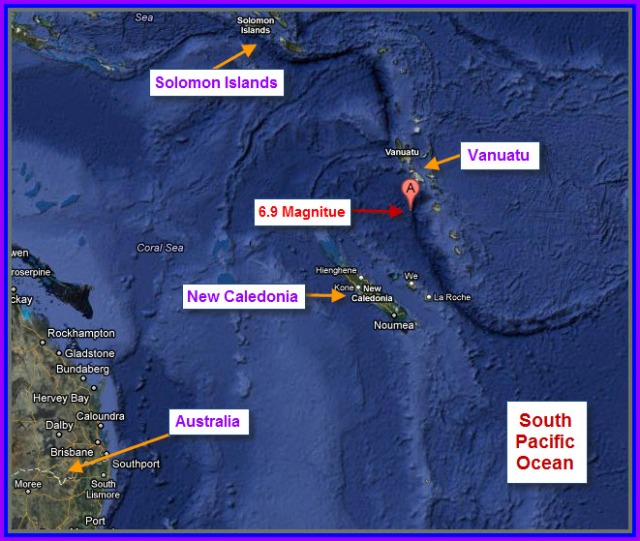 February 2, 2012 – A 6.9 Magnitude Earthquake Struck within 125 miles of Vanuatu – Less Than Two Hours Ago: The powerful quake occurred at 34 minutes after midnight on February 3rd (because of the International Date Line) at the epicenter. It was 10 kilometers (6 miles) deep. The Pacific Tsunami Warning Center stated that, “Earthquakes of this size sometimes produce local tsunamis that can be destructive along coasts within 100 kilometers (62 miles) of the epicenter.” Since Port Vila, Vanuatu is 125 miles from the epicenter precaution should be taken, however, no tsunamis are expected.
The powerful tremor was 76 miles from Port-Vila, Vanuatu; 157 miles south of Santo (Luganville), Vanuatu; 183 miles northwest of Isangel, Vanuatu; and 1,122 miles northeast of Brisbane, Australia.
The region is very earthquake prone with 143 out of 350 earthquakes, greater than or equal to 7.0M occurring over the last 39 years, hitting this area. Indonesia was at the top of the list with 38 and Vanuatu had 14. The only other nation close to Indonesia was Japan with 37. The countries at the top of the lists were both subject to devastating mega-quakes and tsunamis on December 26, 2004 for Indonesia and March 11, 2011 for Japan.
When the trembler hit it was 8:34AM in New York, 7:34AM in Chicago, 6:34AM in Chicago and 5:34AM in Los Angeles.
The Master of Disaster

2 Responses to A 6.9 Magnitude Earthquake Struck Near Vanuatu – Less than Two Hours Ago.