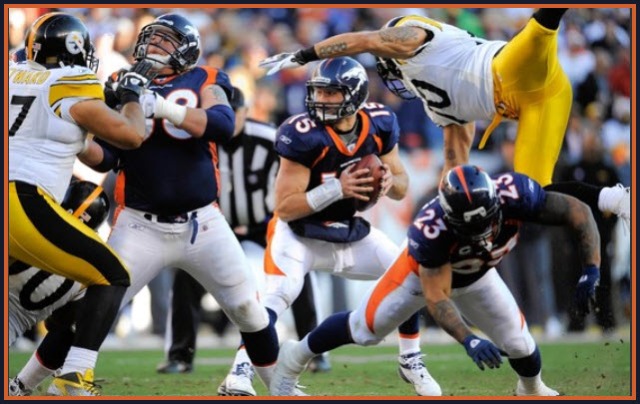 January 9, 2012 – God’s Quarterback Stages Dramatic Overtime Win: Of course it had to happen this way, with overtime craziness and a victory that was almost comical in its sudden, joyful finish. It was always going to happen this way, right? Were you not paying attention all this time? Did you give up on this odd football adventure a few weeks back in Buffalo, where the Denver Broncos were humiliated by the score of 40-14, Tim Tebow threw four interceptions and the most curious phenomenon in sports crashed hard to earth?

Did you abandon then? Did you not believe? Did you give up on Tebow a week prior, in a rough loss to the Patriots, or last weekend, after that putrid stinker to the Chiefs? Did you bail then? Did you rejoin the army of doubters and deniers and take a turn enjoying the public comedown, the merry blast of Tebow Re-Schadenfreude?

Of course you did. Everybody did. It’s quite possible that Tebow himself let doubt creep back during those cruel final weeks of the regular season, when the Broncos lost three straight and looked very much like a passing fad that didn’t deserve a spot in the playoffs. At 24, Tebow is not a man who drapes himself in uncertainty—by contrast, there’s a relentless, unshakable optimism—but a trickle of anxiety had to be there, did it not?

Because let’s be blunt about what was expected to happen in Denver. The 12-4 defending AFC Champion Pittsburgh Steelers, banged up with injuries as they were, were supposed to walk into that stadium and put an emphatic end to the biggest, most ferociously debated NFL story line of the year. It felt like they were hired for the job. The Steelers had a Super Bowl pedigree, a harsh defense, and a hobbled but brutally efficient veteran quarterback with two rings.  They were there to get it done. Tebow-Mania, fading fast for weeks, would be vaporized.

And you could sense a little relief at the prospect. As thrilling as that two-month midseason stretch had been—the epic comebacks; the six game win streak—America had Over-Tebowed. It had taken an unorthodox passer with an indeterminate future and elevated him to the rare air enjoyed by the seasoned superstars of the game, the ones with the seamless throwing motions and glossy statistics. Then, grabbing onto Tebow’s Christianity, it had pushed the athlete out even further — as a pop superstar, a life inspiration, a powerful messenger of faith.

It got a little wacky. High-school students got in trouble for “Tebowing” in the hall, mimicking the quarterback’s bent-knee, crooked-arm, fist-to-forehead victory tribute. Presidential candidates battled each other to grab onto Tebow’s coattails.

But once the losing began, the detractors rushed back in, reinvigorated. The old, familiar critiques resurfaced: Tebow was a limited quarterback. He didn’t throw correctly. He held on to the ball too long. The Broncos were jeopardizing their future by building around him. The national crush was reconsidered. Had other talented young quarterbacks—Carolina’s Cam Newton, or Cincinnati’s Andy Dalton—gotten swamped by the Tebow craze?

Amid the win streak, even the skeptics allowed that the Broncos had engineered an ugly but effective approach to winning football. (Often times, this compliment was bathed in effusive praise for Denver coach John Fox.) But when the losses returned, and Tebow struggled, the theory changed. Now, it was said, league had adjusted to Tebow and was exploiting his weaknesses. In the buildup to Sunday’s game, gossip turned to the potential of seeing backup Brady Quinn. Brady Quinn!

Pittsburgh would make it all moot. Though they let Tebow torment them in the second quarter, using crisp passes and an 8-yard touchdown run to turn a 6-0 deficit into a 20-6 Denver lead, here the Steelers were in the fourth quarter, charging back. When Pittsburgh quarterback Ben Roethlisberger rifled a 31-yard rocket across the middle to Jerricho Cotchery for a game-tying touchdown, the Denver air grew quiet. Roethlisberger pointed skyward, offering the heavens the gratitude of another QB. It felt inevitable. The Steelers were going to finish this.

But then the Steelers didn’t, and the game pushed into overtime, with a lengthy catalog of new NFL rules that sounded more complicated than installing cable television inside a ship in a bottle. The only rule that stuck was one: if a team scored a touchdown on its first possession, the game was over. But then the Broncos won the toss, so fat chance of that, right?

It happened so quickly. Out there in America, there are hundreds of people, maybe thousands, who missed it, running to the bathroom, reaching into the fridge, or even looking down at a smartphone. On Denver’s first overtime play from scrimmage, Tebow hit receiver Demaryius Thomas for what looked to be a solid, 20-yard gain. But Thomas kept going. And going. He crossed the field, thundered down the sideline, out of the grasp, across the goal line, into the tunnel.  Eighty yards. Denver 29, Pittsburgh 23. It looked like a movie.

Of course Tebow Tebowed in celebration. Of course he did. Of course Lady Gaga went to Twitter and wrote of Tebow: “That’s what the **** a champion looks like.”

The Master of Disaster (Born in Colorado)