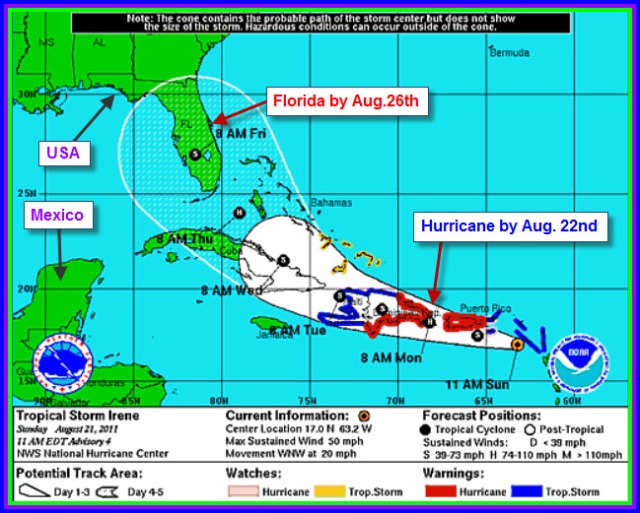 August 21, 2011 – Tropical Storm Irene Expected to Hit Florida: Tropical Storm Irene is expected to strengthen to hurricane force and pass near Puerto Rico tonight August 21st. Irene is located 235 miles ESE of Ponce, Puerto Rico, with maximum sustained winds of 50 MPH. She is moving WNW at 20 MPH. Hurricane warnings have been issued for Vieques and Culebra, Puerto Rico; the Dominican Republic from the southern border with Haiti to Cabo and Frances Viejo on the North Coast (see map).

A hurricane watch has been issued for the U.S. Virgin Islands.

A Tropical Storm watch is in effect for the southern Bahamas and the Turks and Caicos Islands.

Irene’s current direction is expected to continue for the next couple of days with a gradual decrease in forward speed. On the forecast tract, Irene will pass near Puerto Rico tonight or early Monday. It will approach the Dominican Republic on Monday. Maximum sustained winds are 50 MPH with much higher gusts. Irene is expected to strengthen to hurricane force (winds in excess of 73 MPH and wave height up to 46 feet) on Monday. Tropical force winds extend outward for up to 150 miles, mainly to the North of the disturbance.

Rains: Irene is expected to produce total rainfall accumulations of 4 to 7 inches in the Leeward Islands, Puerto Rico and the Virgin Islands; with isolated maximum rainfall amounts of up to 10 inches. Total accumulations of 6 to 10 inches are possible across the Dominican Republic and Haiti, with isolated maximum amounts of 20 inches possible. These rains could cause life-threatening flash floods and mud slides in areas of steep terrain.

Storm Surge: A storm surge will raise water levels by as much as 3 to 5 feet in the Hurricane warning areas. A storm surge of 1 to 3 feet is expected along the coast of Puerto Rico and in the Tropical Storm warning regions. Near the coast, the surge will be accompanied by large and dangerous waves.